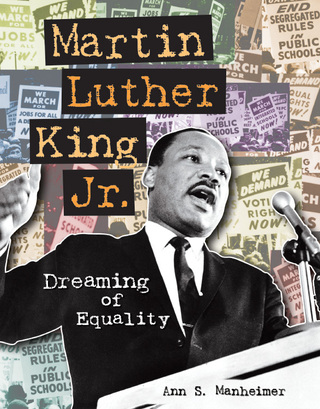 When Martin Luther King., Jr. was little, his father took him downtown to buy shoes. It was the 1930s, and the Kings lived in Atlanta, Georgia. The shoe store was empty. Martin and his father, Daddy King, sat in front. A young white clerk came up.

“I’ll be happy to wait on you if you’ll just move to those seats in the rear,” he said. His words were polite, but he was asking them to move because of their skin color.

“There’s nothing wrong with these seats,” Daddy King answered. “We’re quite comfortable here.”

Daddy King scowled. “We’ll either buy shoes sitting here or we won’t buy any shoes at all.” He stood up, took Martin’s hand, and marched him out of the store. As they walked down the street, Daddy King grumbled, “I don’t care how long I have to live with this system, I will never accept it.”

--from Chapter One, “Remember the Seeds”

Readers will feel like they are sitting in King's congregation or marching by his side to protest injustices because his voice resonates throughout this biography. Beginning with King's childhood in Atlanta's Sweet Auburn neighborhood, his family and faith shaped him. King risked his personal comfort and safety to seek equality and tolerance for everyone and pursue ending segregation and discrimination. His wife, Coretta Scott King, and children supported him despite bombings, threats, and his imprisonments. Manheimer does not shy from telling unflattering aspects of King's life and describing the hate, violence, and harassment he endured, ending in his assassination. King suffered exhaustion and despair but continued his work, which ultimately changed laws. This biography is based on solid historical sources, both primary and secondary, listed in the bibliography. Manheimer recognizes contributions of overlooked Civil Rights heroines. A document section provides portions of the Civil Rights Act of 1964 and Claudette Colvin's court testimony regarding her resisting bus segregation prior to the Montgomery Bus Boycott. Carolrhoda/Lerner, Ages 10 up.
-- Elizabeth D. Schafer - Children's Literature

The courage and self-sacrifice of Martin Luther King and his family in the struggle for civil rights is understood in this installment of the Trailblazers Biography series by Carolrhoda. Dr King’s tireless fight for equality and justice receive the prime focus, but the book also discusses the role of Mrs. King and the sacrifices she made for the movement. Well written, the book talks about Dr. King’s personal flaws and mistakes but does not dwell on them. B/w photographs are scattered throughout the book and correspond with the text. In addition to an index, source notes, and bibliography, there is an abridged edition of the Voting Rights Act of 1964.
--Mary Dlugosz, Hayward PL, BayViews

“Riffs,” in What A Song Can Do: 12 Riffs on the Power of Music
Sixteen-year-old Lee is torn between playing with his band or caring for his hospitalized mother.